Growing up, I lived in a Star Trek household. As my mother’s favorite show, I knew the crew of the Starship Enterprise before I knew the presidents or the capitols or heck, probably even how to read. Throughout my childhood, I was watched over by a picture of Kirk, Spock, Bones, and Uhura. I knew that whatever happened, Captain Kirk would keep me safe.

Being a child in the eighties meant that I lived through so much great pop culture first hand. I saw The Empire Strikes Back and Return of the Jedi in the theater. I dragged my parents to see Back to the Future when it came out and then bugged them for the four years it took for the sequel to be released; four years is a lifetime when you’re a kid. I devoured Battlestar Galactica, Buck Rogers, The Jetsons, Mork & Mindy, and Flash Gordon. I wrote my first letter to a television studio at eight. Written on that kid paper with the dotted lines, I pleaded with the station to bring back The Greatest American Hero. Ghostbusters rocked my entire world. I must’ve watched Doctor Who because when I binged the rebooted series back in 2008, I remembered K-9. Star Trek: The Next Generation stood in for family night in my house. 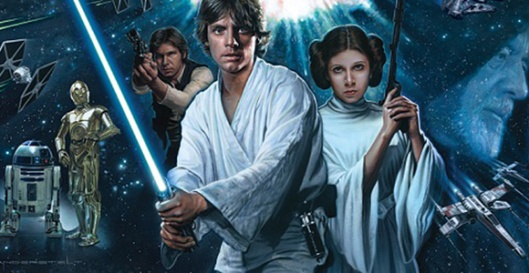 For a long while in the late 90s and 00s, I had rabbit ears and one channel, and refused to have cable–I was going through that “I’m too cool for television” phase–but I still watched The X-Files and The Simpsons every Sunday night. I’d delve into a show every now and again, Northern Exposure and The West Wing, simply because they were shown in syndication every day at the same time making it easy to pick my way through the series.

Back in 2005, I hit a rough patch, meaning everything in my life went to shit with a quickness. Living in one room in Brooklyn, I barely left my futon, which served as couch and bed for an entire year. During that time, my best friend sent me a few dvd’s in the mail introducing me to a tiny blonde vampire slayer who reignited my love of television. Thankfully, scripted television has exploded in the last decade or so. Writers like Joss Whedon and Kurt Sutter take chances on stories that would have never seen the light of day in the 80s and early 90s. And I am immensely thankful to them.

Then came Netflix and everything changed. With it, I can barrel through entire series without waiting a week between episodes.

I don’t watch many comedies, it’s just the way I’m built, but give me an hour-long drama that rips my heart out on the regular and I turn into a junkie. Right now, I’m in the midst of a Dexter binge, screaming through six and a half seasons in a week. Healthy? Maybe not, but certainly cheaper than other addictions. If you were to walk through my house, you’d find posters everywhere: Avengers, Firefly, Game of Thrones, Doctor Who, Guardians of the Galaxy, Battlestar Galactica. I’m sure I should grow up one day and have actual art in my house–or maybe I’ll just finally buy frames for all of my nerd love.

While in the middle of my most recent obsession, and probably while Dexter was in the middle of killing someone, I realized I have written an awful lot about television. Part of it started because I was an English major who wanted to make her education fun. I wanted to explore the concepts that fascinated me through the lens of the shows that sucked me in and taught me about the bonds of family and friendship, about loyalty and misguided attempts at heroism. It’s not like these are new concepts: Shakespeare totally did it first. But more than that? I like sharing my thoughts and talking about why a certain biker was destined to die in the series finale; about how Star Lord and his merry band of buggered misfits teach us about chosen family in the 21st century; about what it means to be a hero in a world where heroes are in short supply.

Most of the shows I write about are bathed in blood and darkness, but they have an underlying theme of redemption and hope. Yes, The Walking Dead gets filed under horror, but it’s more about what you’re willing to do to survive in a world where there’s no easy way to know who to trust. Sons of Anarchy grabbed my attention when I found out Kurt Sutter based it on Hamlet and Macbeth, but it was Jax Teller’s search for redemption that kept me watching. I laughed when my best friend’s wife suggested I check out Arrow, but once I started, I didn’t come up for air until I’d finished the first two seasons.

There are still shows on my radar that I haven’t checked out yet: The Shield, The Wire, House of Cards, and Six Feet Under come to mind. And there are shows that I haven’t finished yet: Breaking Bad, Justified, and Longmire; school really got in the way. Fanatical Addict is the place where my obsessions come to play. The plan is to review a few of the shows that I absolutely adore, Doctor Who, The Walking Dead, Arrow, and Sherlock (whenever it comes back) for sure, as well as the one I’m most looking forward to this fall: Kurt Sutter’s newest project The Bastard Executioner.

In the Metaphoricals section, you’ll find essays about whatever happens to pop into my head while watching a show. I like examining the layers that most people don’t notice–Jax Teller’s white t-shirt and sneakers, why Ray Palmer is a frakking stalker no matter how pretty he is. Sometimes I put on my writer hat and try to figure out where a show is going. (I totally predicted the end of Sons of Anarchy–please don’t burn me at the stake.) The Binge with Me section will have my random exclamations at whatever show I’m currently yelling at. My Dexter binge will be the first big project over there.

I’m eclectic, obsessive, and just plain weird at times. Characters like Daryl Dixon, Matt Murdock, Oliver Queen, and Dexter Morgan fascinate me. Anti-heroes are my drugs of choice. Poke around, there’s something there for any TV fanatic who loves the shows that examine what it means to be human, whether the characters are moving toward the dark side or the light doesn’t matter to me. Every show I write about has grabbed me and dragged me down a path of “I’m binge-ing: leave me alone,” or “It’s Wednesday night at nine pm, please don’t expect me to answer the phone.”

I’ll be live-tweeting my favorite shows as well as shows I’m currently binge-ing and you can follow me: Fanatical Addict. I’m also over on Facebook and Tumblr as Secret Nerd Princess. You can also follow this blog to have my reviews and randomness delivered right to your inbox, but don’t worry, I won’t overrun your email, I do have the ability to show restraint. Mostly, I love finding new people to discuss my obsessions with, so join me in my madhouse.

At the very least, you’ll be highly entertained.

1 thought on “Guardian of Voracious Viewers”